You are here: Home / Global Markets / Are Collapsing Chinese Equities Just the Tip of the Iceberg?- Interview with a Tudor PM 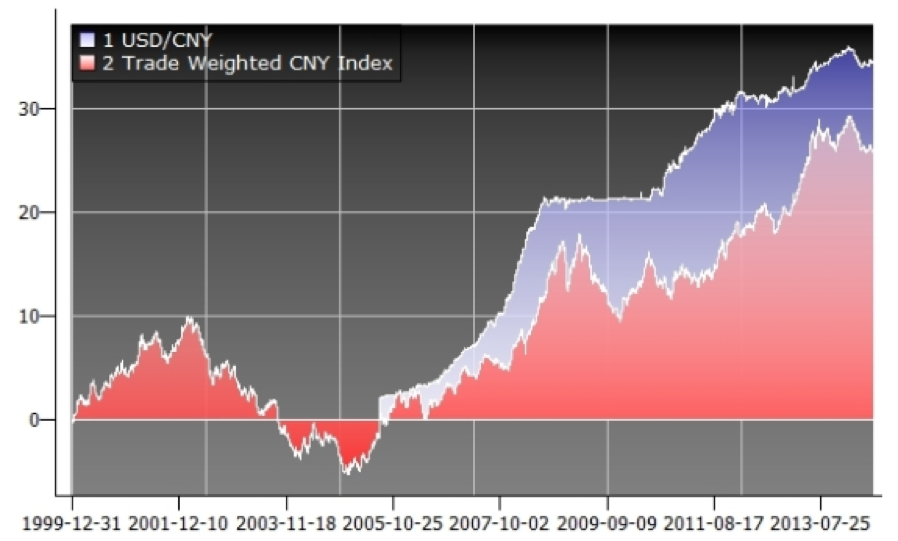 Katina Stefanova:  But the PBOC seems to have realized this now and have begun to gradually devalue the Yuan.  Surely you must believe that this might very well help arrest the fall.  Isn’t this an easing of financial conditions for Chinese companies?

Amit Hampel:  Indeed at the surface it appears to be an easing of financial conditions.  But the problem is far more pervasive than the simple exchange rate.  With the devaluation of the Yuan comes a very large price in the form of investment flight from China.  This further appreciates the dollar and places even greater pressure on emerging markets that have built themselves around the fortunes of the great Asian giant.  You see, for the last 25 years emerging markets from Australia to Brazil, have devised economies predominantly dependent on China’s growth to fuel natural resource shipments to China.  After the Great Recession of 2008-2009, it appears consumers are a bit more wary of how they spend their money, especially in the United States.  One recent report claims that of the some $150 billion of increased purchasing power granted to US consumers through the oil dividend, nearly 80% has been spent on restaurants, bars and entertainment.  People are just not purchasing goods like they used to prior to the Great Recession.  In my opinion, the entire debt financed export model overestimated how voracious an appetite the developed world would regain for spending on manufactured imported goods.  Simply put, the developed world consumer is not keeping pace with the infrastructure investment allocated to making consumable goods.  All this has resulted in a classic mal-investment cycle that appears to be busting, especially in the emerging markets space.  Right now, it is difficult to tell the difference between the dog and the tail.  Was it China’s overinvestment in the manufacturing and infrastructure that did this?  Or was it the massive over-allocation to resource extraction that did this?  It really doesn’t matter at this point, other than to realize this is unfolding at a rather inopportune time for global markets.

Katina Stefanova:  That seems to be a very sanguine view of the world as you seem to indicate that the timing is worse than normal.

Amit Hampel:  And that is exactly the main point.  The timing couldn’t have been much worse.  The dollar is on a self-fueled rally on the back of relatively healthy domestic US data, whether it’s job growth, or auto sales, or housing.  To complicate things even more, the model driven Federal Reserve has begun to hike interest rates to head off their projected and yet to be measured inflation.  And rates on a global basis are so incredibly low already, many in my field see very little efficacy in lowering rates any further for many of the effected economies.  Basically, after a decade of ultra-easy monetary policy, predominantly championed by the Federal Reserve, the great policy correlation period of the past 20 years is unravelling into the big decoupling trade.  A stronger dollar and higher borrowing costs will continue to pressure emerging markets.  And an over-indebted China will continue to navigate a difficult path to a more service driven economy.  The risk for China and most of the emerging markets will be dealing with the inevitable social unrest.

Katina Stefanova:  In this new world order of lower than normal aggregate demand and industrial and resource driven overinvestment, what are investors to do?

Amit Hampel:  That is the $64,000 question of course … but in this environment it will be important to choose the best real growth stories.  The economies that stand to prosper the most will be those with strong banking systems and pent up consumer demand.  The US is experiencing a cyclical upswing for cars and houses as a result of years of pent up demand.  This coupled with a historically dynamic technology sector should prove to be a driver for many years to come.  I also sense that given new international concerns regarding national security, firms that concentrate on providing intelligence, computer monitoring equipment, and defense systems stand to do well as the US continues to retreat from its role as the global police department.  Governments will allocate more money towards the growing terror threat, whether it will be in the form of military hardware or monitoring software.  Additionally, companies that deal with water sourcing and infrastructure security should do well.  The old buy everything trade is simply not going to work anymore.  Investors will have to become more selective and dynamic with their money.

Katina Stefanova:  That certainly appears to be the most likely outcome for the immediate future.  In terms of China’s markets, to what extent do you think the slump in China is going to impact major equity markets?  It seems to already be happening.

Amit Hampel:  As far as the data is concerned there really is little evidence of long term correlation between Chinese equity indexes and developed world indexes, as measured by the SP500.  But, if the Chinese problem becomes a liquidity event than clearly the correlation will increase markedly.  As for emerging markets and China, the correlation has been historically higher as they really have become for the most part one in the same: they are so intertwined in terms of the overall production process for goods on a global scale it would be difficult to detangle their relationship.  Additionally, China’s market is far from one full of transparency.  There is no predictive analog to follow as to when the central authorities will come in to support prices.  To me the real litmus test is the behavior of the currency.  If the Yuan gradually and controllably devalues, than markets should calm down.  But if the devaluation becomes more violent as we have seen in the past week, I would expect the contagion risk to increase.

Katina Stefanova:  Thank you so much for your time and for sharing your perspective with the Forbes readers.

Read this article by Katina on Forbes by clicking here.