China has recently been considered a counterbalance engine for growth to the US, but after the 2015 August sharp decline in the Chinese stock market and the Chinese governments feverish response to correct the fall with questionable method ranging from outright purchase of nose-diving Chinese stocks to putting traders who were shorting the market in prison, it has become clear that the global economy cannot rely on Chinese growth as much as hoped. Firstly, China is converting from an export to a consumption economy which is already changing its pace of growth from the remarkable double digits to the more modest below 7% GDP growth.  The decline of Chinese growth will likely continue.  Second and more important, it is hard to decipher reliably how much risk and volatility exists in China due to obscure reporting and unreliable rule of law.  A significant economic downturn in China will pressure both its legal and regulatory infrastructure and its government actual appetite for a free market approach. In our view, China add more volatility than potential for economic growth in 2016 and beyond.

In other words, the outcomes for US and Global stock markets can range from slightly negative performance to a significant decline. For example, a 10 + decline in the S&P 500 would not be surprising especially after years of spectacular uninterrupted bull market run.

USD Dollar and Other Currencies:

Propelled by rising interest rates as well as the US continuing to act as a safe haven for capital outflows from less stable areas such as the Middle East and China, we expect the US dollar, Japanese Yen and the Swiss Franc are likely to remain strong.

Picture: The Rise of US Dollar 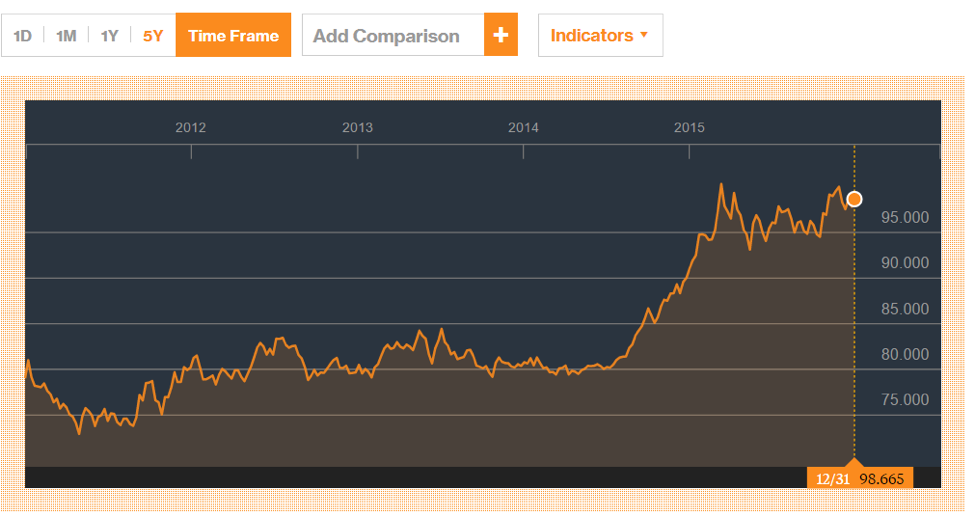 The risk-off mode will likely continue the flight to “safe havens” such as the US dollar, the Japanese Yen and the Swiss Franc. The Japanese Yen could be the currency winner of 2016 as the BOJ’s reluctance to launch significant new rounds of stimulus could push the Yen higher against other major currencies with traders unwinding the popular multi-year, short -Yen carry trade in a broad risk-off market environment. The wild card with the Yen is the poor long-standing current account deficit.

Meanwhile, driven by slow economic prospects, the growing risk of a Greek succession from the common euro currency regime, and unfolding ECB monetary easing, the Euro will most likely continue to underperform against the US dollar and the British Pound.

In recent years we have seen a lot of volatility in currency markets due to divergent stages of monetary policy in different countries shifting the flows of gigantic sums around the world in search of the best returns that cause exchange rates to fluctuate.

Currently, America has already halted its QE program and started raising interest rates in December. Britain, is a little way behind, although interest rates are expected here within a year or so and the British QE has also ended. Europe is in a very different place and the ECB is likely to keep interest rates at rock bottom and the euro weak. To achieve the latter, more European QE may needed. Consequently, the Euro is likely to trade down to parity with the US dollar while the Pound may head lower to around USD 1.20 -1.30 range in the short run.  Further, investors would need to closely watch the relative pace of US vs. UK interest rate hikes.

China (the world’s second-largest economy) is trying to address the challenges that began to unfold last August and will more likely need monetary easing translating into a lower Yuan. Relatively low Chinese government debt levels and relatively high interest rates (4.35%) provide a lot of room for easing.  For comparison purposes, US interest rates are at 0.5% and Government Debt to GDP at 103%. 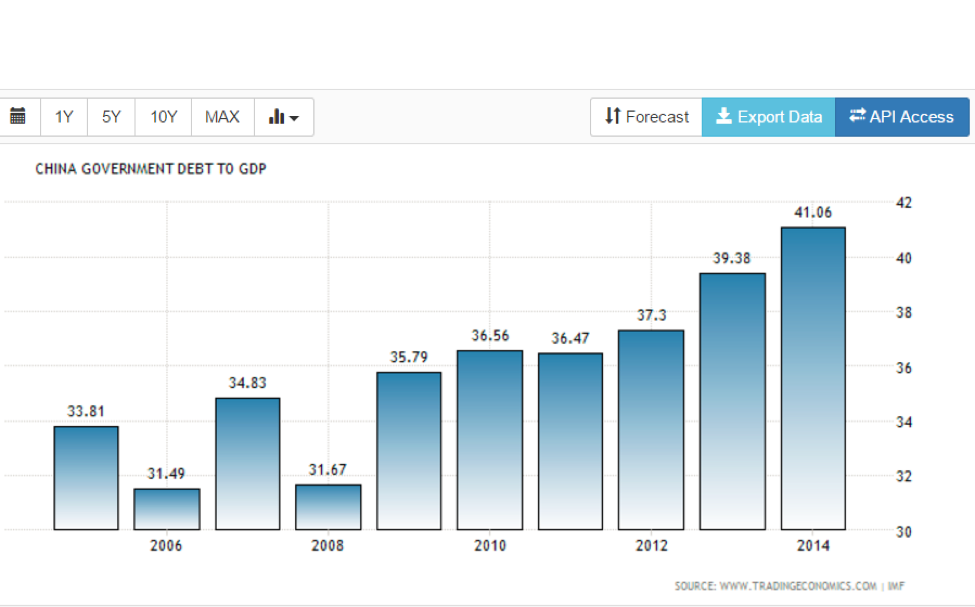 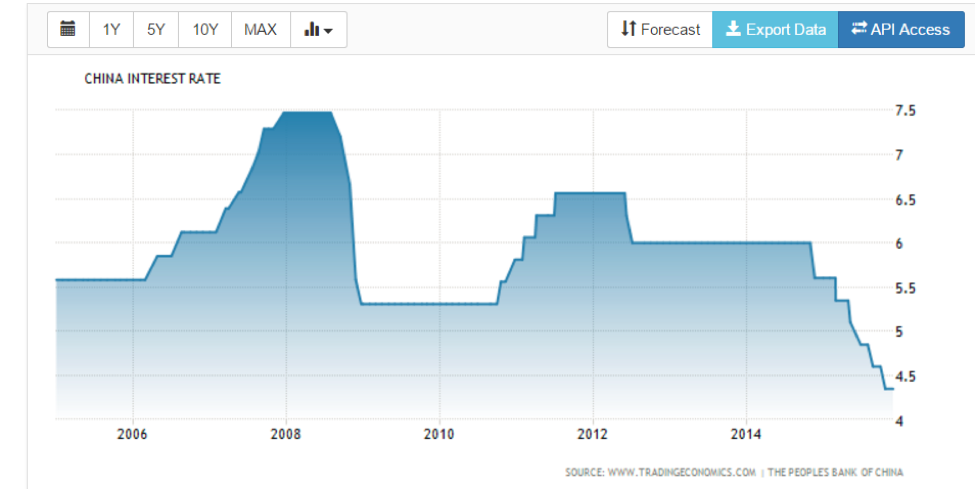 However, according to the BCG Global debt report, China has added more than $40 trillion in debt since 2005 and that has happened primarily at the house hold, corporate and regional government level.  Outstanding loans for companies and households stood at a record 207 percent of gross domestic product up from 125 percent in 2008, data compiled by Bloomberg shows. Thus China is potentially facing an internal debt crisis: 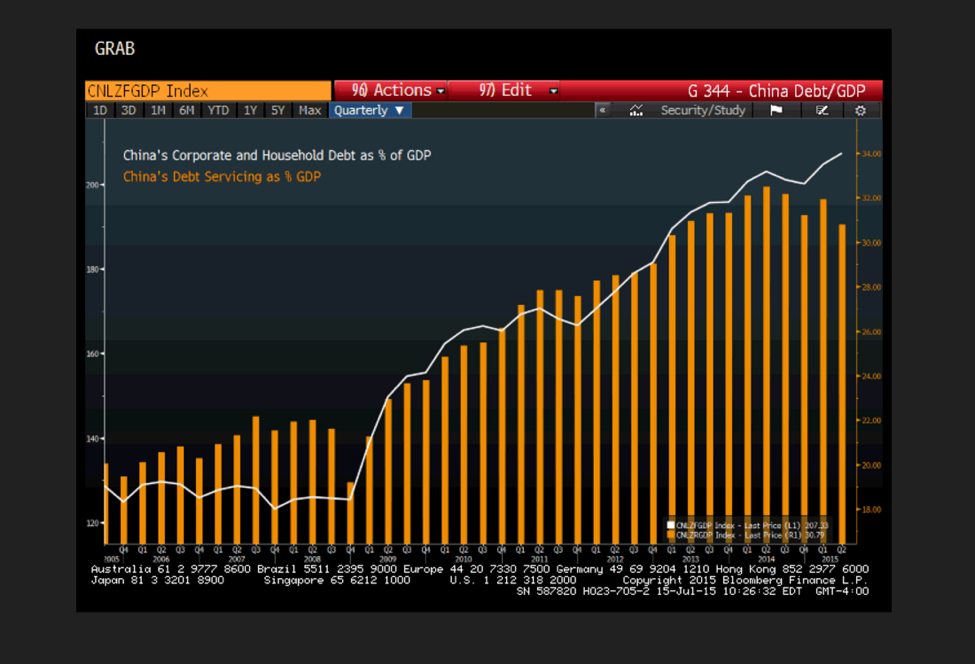 Worst case scenario, a potential debt bubble burst in China will require significant government intervention and both the infrastructure and the liquidity for the Chinese central government to absorb and restructure. Therefore, a further depreciation 5 % – 7% in the Yuan’s exchange rate vs. the US dollar in 2016 would be likely and a plummeting Yuan possible but not as likely.

Commodities-based currencies such as the Australian, New Zealand and Canadian dollar should meanwhile continue to decline against the greenback in 2016 in line with the expected continuous weakness in commodities and crude oil prices.

Overall, we foresee significant volatility in currency markets in 2016 which provides opportunities for macro driven hedge funds and currency traders.

The new low oil price regimes are here to stay and unlikely to reverse direction in 2016.  At the beginning for 2015 year, we wrote that the oil price equation has permanently shifted due not only to a long-lasting economic slow-down impacting demand, but also because of increased supply due to technology innovation in shell oil exploration (Do Oil Prices Foreshadow a Slump in US Stock Markets?).  In the decades to come, OPEC is likely to lose its ability to dictate oil prices not only because of the factors above and because of lack of unanimity between the more and less wealthy OPEC countries, but also above all because of a huge investment in alternative energy R&D and government subsidies in the US and Europe which will gradually and relentlessly erode the world’s dependence on oil. The second and third order of consequences of such as a seismic shift need to be managed on the political arena as both the Middle East and Russia will experience significant economic pressures which may lead to further regional and global destabilization.  The war in Ukraine and growing terrorist attacks may be just the beginning of global destabilization. No one including the Western World will benefit from that. 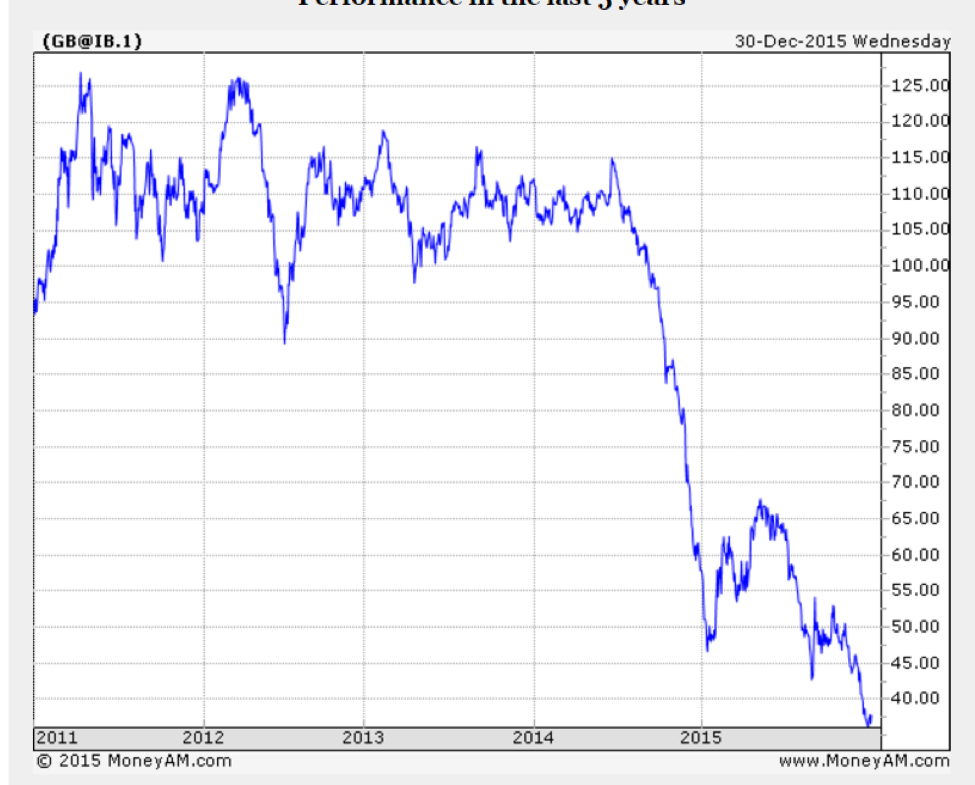 As for gold, the precious metal will most likely drift lower towards the $1000 per ounce mark mainly due to a stronger US dollar. 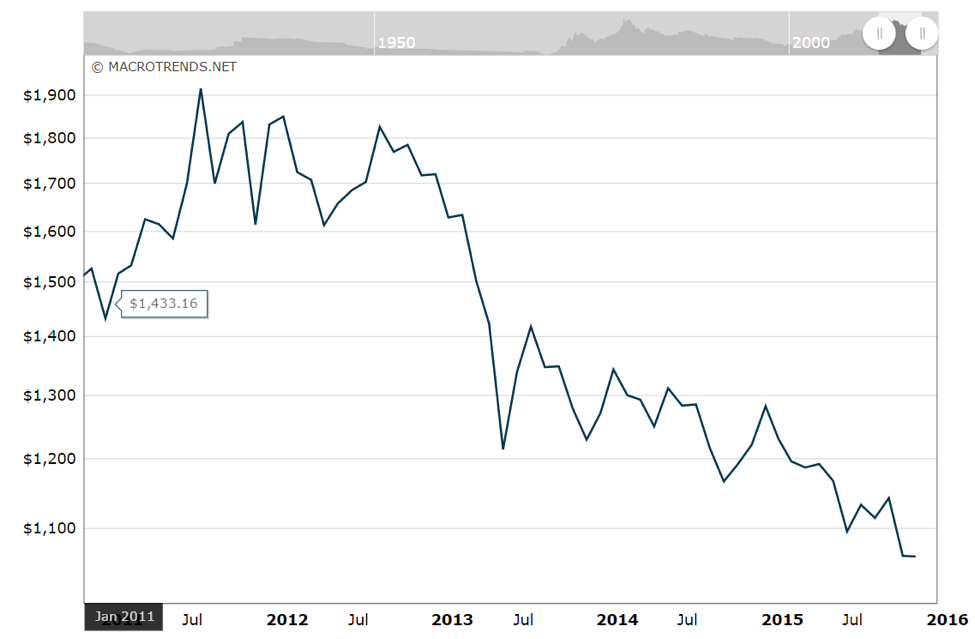 Lower demand and a structural shift in emerging markets specifically China into a consumption economy will pressure other commodities downward. “Copper and iron ore have major oversupply concerns and this should drag Australia deeper into the abyss,” said Amit Hampel, former portfolio manager at Tudor.

The real estate boom in both China and the Middle East is likely to slow and even experience a meaningful correction.  In China, the growing real estate bubble may potentially burst in 2016. Although the Chinese central authorities have the capacity to absorb much of the trillions of dollars debt if they were to act swiftly, which will likely prevent a spreading global crisis. However, the actual impact on foreign investors in China’s real estate which have increased through Private Equity deals in the last decade is hard to predict.

In the Middle East, the vast oil-generated wealth has translated into fantastic real estate boom and little investment in innovation or development of other industries.  With oil no longer guaranteeing prosperity, the UAE, Saudi Arabia, and Kuwait for example, will likely slow down investment in real estate and tighten their belts.  That being said, these countries have huge reserves in the form of sovereign funds and family offices which can soften the blow for decades to come.  Best case scenario, smart policies focused on technology, research, education and local industry growth can provide the seeds for a new kind of economic prosperity.  How likely that favorable outcome is is a question for the political and social analysts.

The US real estate market has also seen significant growth post 2008 financial crisis and has largely recovered. And while the US economic real estate fundamentals do not spell booming growth, in our view US real estate remains one of the few places where both foreign and institutional investors can generate reasonable yield in a risk adjusted basis.  On a relative basis, the US remains one of the few safe-havens where foreign capital from increasingly less stable markets such as China, the Middle East, Russia and Latin America is likely to flow and US real estate is a likely beneficiary (Reasons Why US Real Estate Should Remain Buoyant)

We expect significant volatility in 2016 which will provide an opportunity for hedge funds, which make the right bets, to outperform long only managers. We expect long only risk parity and global allocation funds to under-perform.  For investors that do not have access to hedge funds or short positions, increasing their allocation to cash (preferably USD), may be a good move.

Read this article by Katina on Forbes by clicking here.