You are here: Home / Asset Management / How to Make Sense and Profit in Today’s Confusing Economy?

Today’s economic and political environment is complex, which not surprisingly has polarized investors, political leaders and financial analysts on what the future holds.  There are plenty of factors to support both an optimistic continued growth scenario and a pessimistic recession type scenario.

On one hand, we have the doom and gloom side, represented by the leading economist and former Chairman of the Federal Reserve, Alan Greenspan, predicting eminent US economic meltdown (Alan Greenspan Warns Against Depression) and the demise of the euro with the inevitable departure of Greece ( BBC News). On the other hand, Goldman Sachs’ 2015 Global Macro Outlook assures investors that the world economy will continue its slow but steady recovery with the US leading the pack. (Goldman Sachs Global Macro Outlook).

With such contradicting advice, what should the average investor, who lacks the data or the experience of the heavy hitters, do?  Should we convert all our savings to gold, cash or even bitcoin, or should we continue to ride the stock market bull for another year?

Before we answer this question let’s look at the fundamentals.  It is important to note that both the boom and bust believers are looking at the same facts but interpreting them differently by weighing different probabilities of how things will play out in the future:

There are a couple true fundamentals that drive economic outcomes (political volatility aside) – productivity and its impact on growth and the short and long-term cycles of indebtedness (See How the Economic Machine Works by Ray Dalio). Markets do not accurately mirror the economy and are impacted by the investors’ perception instead, thus behavioral economics also comes into play (See Justin Fox’s Myth of the Rational Market).  The experts’ disagreement stems from the divergent view of whether the developed economies, namely the United State, Europe, and Japan, are able to grow themselves out of an unprecedented level of indebtedness by optimizing for productivity.  Another looming question is whether the emerging economic superpower, China, can sustain the tremendous gains its economy has made, transition to a consumption driven vs. export-driven economy, and build an infrastructure of transparency and rule of law. (Michael Pettis Blog)  Finally, in addition to the economic fundamental drivers, the global economic engine is dependent on the world managing to maintain stability in the most volatile conflict areas such as Ukraine and the Middle East.

Before we look at the probabilities of how these questions play out in the long run, let’s look at the top six most impactful macroeconomic trends that the proponents of both sides of the argument see:

1) The world economy is entering a period of slower growth:

We see declining productivity in the developed world represented by slower long term real growth rate combined by a shifting economic fundamentals in China, which needs to transition to a consumption-based model.  The slowing world growth means that investors should readjust their expectations to lower asset returns.  Traditionally, we have seen 7-8% on average returns from equities.  It is unlikely to see such returns in the next 10 years as the world economy is shifting down structurally.  Jordi Visser, CIO at Weiss Weiss Multi-Strategy Advisors shares the same perspective:  “Since 2009, we have seen lower nominal global growth, lower inflation and less pronounced business cycles.  Due to structurally lower emerging market growth, an increase in developed market debt, and worsening demographics and exponential innovation in the developed economies, we feel this low growth/low inflation environment may persist, making fundamental investing challenging for years to come.”

2) The United States economic engine is leading the world on the path to recovery while at the same time has accumulated an unprecedented level of government debt.

It is hard to argue that the US economy narrowly avoided the worst case scenario post the 2008 crisis i.e. a 1930’s depression which could have collapsed the US and the world economies.  Through timely government intervention and proactive loose monetary policy including lower interest rates and several rounds of quantitative easing, the US was able to stabilize.  Below are the indicators of economic recovery:

US Unemployment falls to 2008 levels

3) The economic divide between the US and the rest of the developed world including Europe and Japan is widening.

For example, Goldman Sachs called this trend the great divergence and noted in its Global Macro Outlook that the gap is here to stay.  As a result we see the US Fed contemplating a measured tightening and the European and Japanese Central Banks still struggling with the potential risk of deflation. 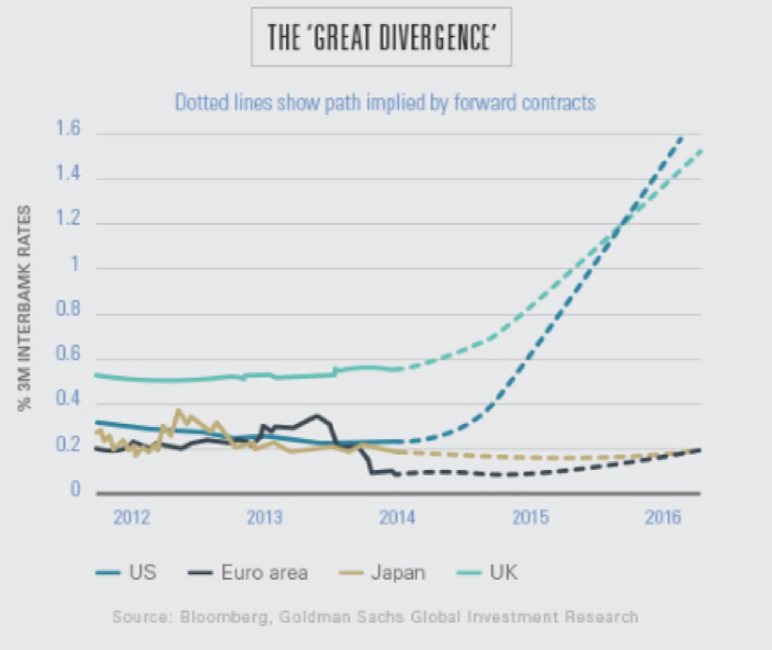 We see that trend in the divergence of US and European bond yields. For example, the difference between US and Germany’s benchmark borrowing costs has widened to a record high as economic recovery is expected to lead the Fed to raise interest rates this year, while low inflation and low growth pushed the ECB to continue quantitative easing. The chart below captures the emerging gap overtime:

4) The US Federal Reserve will likely be Raising Interest Rates but Gradually and Cautiously.

Encouraged by stronger than expected growth, the United States Federal Reserve will likely begin to tighten its monetary policy. We see that in movement of Treasury bond yields. The United States Government Bond 10Y increased to 2.24 percent in March from 2 percent in February of 2015. The United States Government Bond 10Y averaged 6.34 from 1912 until 2015, reaching an all-time high of 15.82 in September of 1981 and a record low of 1.40 in July of 2012.  With increased probability of monetary tightening, US yields will continue to increase (See chart above).

5) Oil Prices Plummet and Will Most Likely to Stay Low.

I agree with Goldman Sachs report that the fall in oil prices is primarily (but not only) driven by change in production capacity of non OPEC countries which fundamentally shift the pricing equation for oil today and in the future.  Goldman coined this dynamic “A New Oil Order”.  (See Do Falling Oil Prices Foreshadow a Slump in the US Stock Market? and Goldman Sachs 2015 Global Macro Outlook)

One of the most fascinating stories at the moment is how China is going to develop from here.  It is not unlikely that the historic GDP growth of 8% continues to fall to 6% or 7% (note: this is below current expectations of 7.5%).  The decline signifies a shift in the Chinese economy from an export orientation to a consumption orientation. In my view there is no need to panic. The China shift is not necessarily bad for the world or bad for China as long as the economic transition is handled in an orderly manner, financial crisis is avoided and the market maintains liquidity (How Might a China Slowdown Affect the World).  Given that the Chinese government sits on top of one of the largest foreign reserves in the world (over $1 trillion), limited debt and thus practically unlimited borrowing capacity and an ability to direct the economy, a measured transition should be possible. 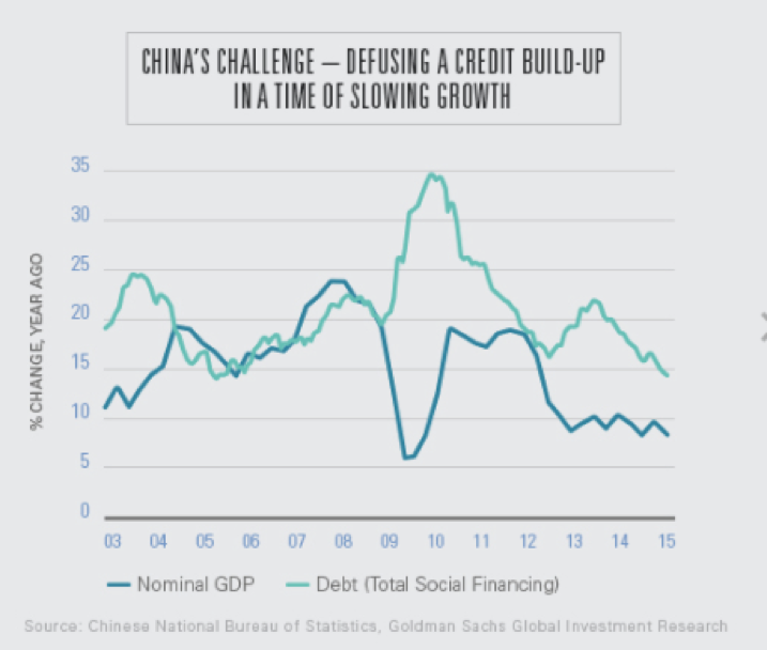 Translating the Fundamentals into Market Bets:

Understanding the above fundamentals and their implications on markets can help investors profit from the current environment and understand the downside risks. Based on the above weighing of the macro trends, I do not see a high probability of an eminent doom and gloom scenario, but enough support for continued moderate global growth led by the United States.  The growth was enabled by smart central bank policy after 2008 and stronger than expected recovery and strong corporate profits:

This view translates into the following market bets:

That being said, there are enough “wildcards” on the economic table today that might lead to reversal.

First, it is interesting to see how the Chinese government will manage what could be a credit bubble and a lower growth economy.  If well handled, a cooled-off Chinese economy may not be bad for the world.  If badly handled, we may end up with both a regional and global slump and even a resurfaced risk of global recession.

Second, how carefully the Fed handles the likely tightening is going to be critical to the US and world economy.  Too much and too early monetary tightening in the US can pull the breaks on the world recovery and lead to a sharp decline of the stock market.

Thirdly, there are enough pockets of political instability in the world today which investors should not ignore. It is hard to say what an increasingly frustrated Russia struggling from plummeting oil prices and a Ruble deflation will do. Finally, Europe has to do more than just save Greece: The region remains a powder keg to the world economy.  Spain, for example continues to struggle with 25% unemployment and the rest of Europe face indomitable structural difficulties (Will European Stocks Outperform US Stock This Year?). These factors contribute underlying risk to the world economy and markets.  If any of the above wildcards increase in probability or materialize, investors may need to quickly shift their market bets.