You are here: Home / Asset Management / Is Now the Time to Buy European Stocks?

Various financial analysts are issuing buy recommendations on European stocks. The general logic is that share price increases in Europe have fallen behind those of the US leaving European equities cheaper than their US counterparts. “The S&P 500 has risen 9.5 percent since Oct. 15, compared with a 6.6 percent gain for the Euro Stoxx 50 Index. That pushed the U.S. gauge’s valuation to 17 times projected earnings, compared with 14.1 times for the measure tracking the biggest euro-area stocks, data compiled by Bloomberg show” (Bloomberg News).

Furthermore, the ECB recently announced a one trillion euro government bond buying program to revive the sagging euro zone economy. Together with existing schemes to buy private debt and funnel hundreds of billions of euros in cheap loans to banks, the new quantitative easing program will release 60 billion euros ($68 billion) a month into the Euro-zone economy. The announcement boosted European shares to a seven year high. However,  it is questionable whether continued price appreciation of European shares is supported by fundamental factors and whether it is truly sustainable and attractive to long term investors.

While it is factually correct that the US stock market has enjoyed significant gains in the last three years and that Europe has lagged behind (see chart below), it is, however, incorrect to conclude that European stocks are undervalued and  will outperform US stocks in the long run.

There are enough economic warning signs and a lack of solid evidence that put the general Street recommendation into question despite recent ECB actions. I describe some of my concerns below:

To understand what could happen to European stocks, investors need to look deeper and evaluate the fundamental drivers impacting European corporate profitability and expectations of future economic growth in the region.  Let’s examine the underlying drivers by applying Warren Buffett’s approach to value investing and look at 1) whether European stocks are currently undervalued and 2) whether a meaningful catalyst exists that will change European stock valuations in 2015.

Valuation: While P/E rato for European stocks is below their 2001 level, at slightly above 16 it is still above the mean historical average of 13 which makes me question whether European stocks are really undervalued (See chart below). Additionally, corporate earnings per share in Europe have fallen by 24 percent, while these have been steadily rising in the US by 19% since 2008 levels. (Source: JP Morgan) 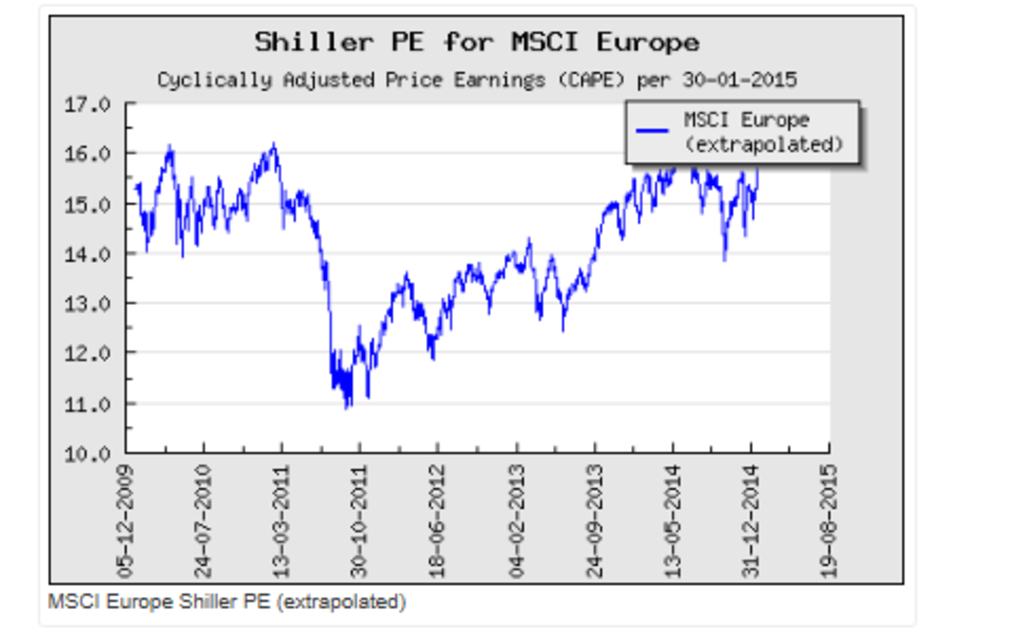 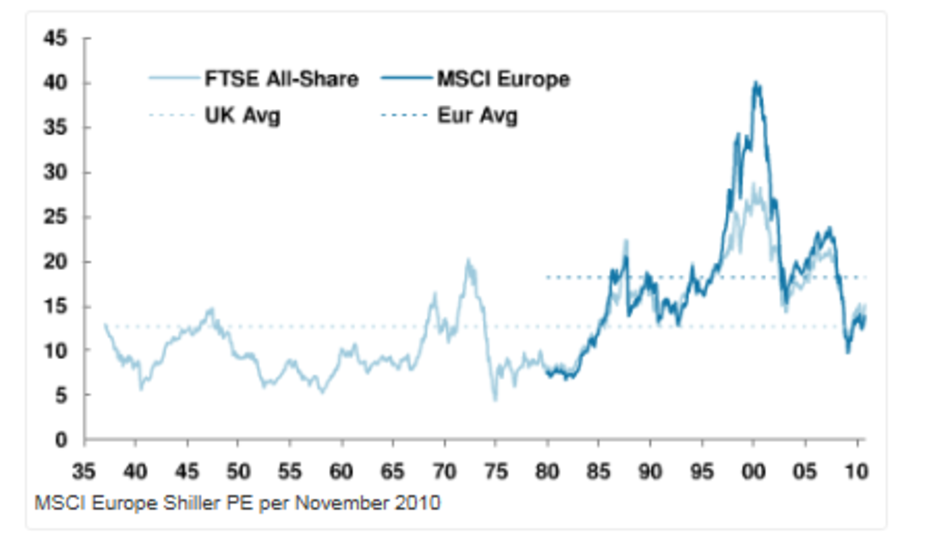 Note:  I used the Shiller P/E because I believe it to be a more reasonable market valuation indicator than the P/E ratio because it is adjusted to business cycle volatility and it eliminates fluctuation of the ratio caused by the variation of profit margins during business cycles.

Economic Environment: The overall economic outlook for Europe continues to look weak. Fourth quarter 2014 GDP was essentially flat from a year ago (0.2%). Compare that to 5% GDP growth in the US over the same period.

EU unemployment rates at 8% have not fallen meaningfully. Compare that to the steady fall of unemployment in the US to 5.5%.

Given the  economic picture drawn by stagnant GDP and persistent unemployment, European stocks appear appropriately discounted against US stocks.

Does a Catalyst for European Growth Exist

If investors were to carefully examine the fundamental economic, political and social indicators, it is difficult to find evidence that probabilistically Europe will recover significantly in 2015.   Continued stagnation in Europe is a more likely scenario, and even the possibility of sliding into a recession has not yet been eliminated, particularly if ECB policies are not decisive and timely.  In the long run, significant political, social and economic restructuring is needed if Europe is to find the catalyst to a new era of economic growth. But for now is is hard to find solid evidence that European stocks will outperform US stocks in the long run despite the fact that the european stock market has lagged behind the US in the last four years. If investors intend to add European stocks to their portfolio focusing on export- oriented companies with strong fundamentals in solid euro zone economies such as Germany would be my preferred bet.